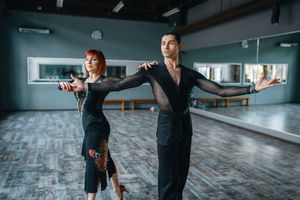 In Part I of this blog post, we discussed two methods for deciding what style of social dance is right for you. In Part II, we will explore how musical preferences can have a huge impact on what kind of dance you will most enjoy. Whether you like to shimmy to salsa or get down to disco, Arthur Murray Dance Center San Antonio has a dance style that you are sure to love. If you live in the San Antonio area and are looking to learn how to dance, Arthur Murray Dance Center can help! Sign up for our new student offer now and get your first lesson on us.

Unsurprisingly, learning to dance involves listening to a lot of music. In order to get the most enjoyment as possible out of your time with us, we recommend choosing a style of dance that involves music that you actually like!

If you’re a fan of Latin American music, then we recommend trying out one of the many Latin dance styles that we teach. These include:

Latin American music is fast-paced and fun, and often involves elements of jazz, rock and hop. It has influences from all over the world, including Spain, Portugal, Africa, and the Carribean.

Are you a fan of big band music? If so, you’ll love our selection of swing dances. Swing dance evolved with the emergence of jazz in the early twentieth-century. Today, swing dance is danced to rock music of various kinds, including blues and boogie woogie. Swing styles that we offer at Arthur Murray Dance Center San Antonio include:

It should be no surprise that many of our students are big fans of country music. This is Texas after all! At Arthur Murray Dance Center San Antonio, you can enjoy listening to country music while learning new dance skills, thanks to our country dance lessons. Country dances we teach include

All of these dances are variations of the basic Country Western style, an informal form of dance that dates back to the frontier days. Country Western dance involves a lot of leading and following, as well as heel and toe touches rather than flat-footed glides.

Standard ballroom dancing music is often written in triple meter, and dates back to the Romantic Era, particularly in Vienna. Famous waltz composers include Frederic Chopin and Johann Strauss.

Are you suffering from disco fever? Arthur Murray Dance Center San Antonio is here to help! Those who left their heart in the 1970’s will love our disco dance styles, include:

The hustle has some features in common with mambo, salsa, and swing dance, so fans of those styles may also want to boogie down to one of our disco classes. Nightclub two-step is frequently danced to mid-tempo ballads, such as the song “Lady in Red.”

Whatever your music preference, Arthur Murray Dance Center San Antonio has a dance for you! If none of the musical styles we mentioned tickle your fancy, don’t worry! Get in touch with our team today and we’ll find the perfect dance to get you shimmying and shaking in no time!

In conclusion, there is no magic formula for deciding what style of dance you will most enjoy. It’s a matter of personal preference and objectives, and everyone is different. If you find yourself still confused about what type of dance to sign up for, why not experiment? With so many dance styles on offer, Arthur Murray Dance Center San Antonio gives you the freedom to explore multiple options until you find your perfect fit(s)! Reach out today to learn more, or sign up for our new student offer to receive your first lesson free of charge.