Discover the Joy of Social Dancing

Feel inspired and challenged when you give social dancing a try! At Arthur Murray Dance Center San Antonio, our team of professional dance instructors will help you express yourself on the dance floor, no matter your skill level. Even if you think you have two left feet, our program was designed to help you overcome each step and grow your comfort level on the ballroom floor. Choose the style (or styles!) that appeals most to you, then contact us. We can’t wait to see you in class! 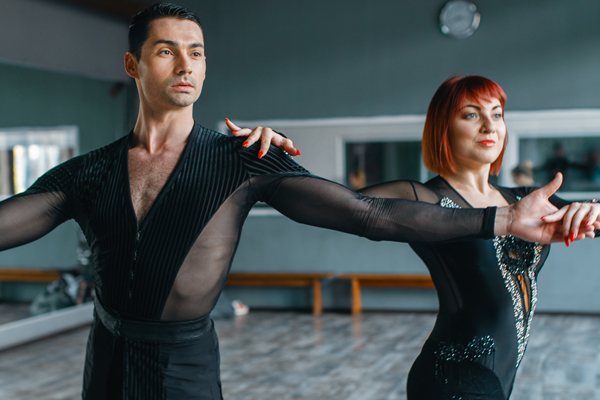 Latin dance originated in the indigenous cultures of South America, Central America, and the Carribean. When Spain and Portugal conquered these empires in the 16th-century, they incorporated their own dance’s style with that of the native population. As Europeans and enslaved Africans began to populate Latin America in the following centuries, they, too, influenced the indigenous styles of dance, eventually resulting in the Latin dance that we know today. Latin dances are rhythmic and sensual, and provide room for improvisation.

Although all of the styles of dance we teach at Arthur Murray San Antonio may technically be called “ballroom,” ballroom dance as it is commonly thought of originated in Europe in the 16th-century as a form of social dancing for the privileged classes (as opposed to folk dancing).

Ballroom dance focuses on elegance, grace, and fluidity of movement. During a ballroom dance, the couple is constantly transitioning from one place to the next in a fixed pattern.

“Swing dance” is an umbrella term for a number of lively dances that emerged with the swing style of jazz music in the 1920s-1940s. Swing dancing is heavily influenced by African-American culture, with the ever-popular Lindy Hop originating at the famous Savoy Ballroom in Harlem in 1928. Swing dance is the perfect choice for those interested in a high-energy take on partner dance.

There’s no better place in the world to learn country dance than in San Antonio! Country, or “country/western,” dances were performed for generations at informal gathering places such as clubs, honky tonks, and dance halls, but today you can see country dancers on competitive ballroom floors! At Arthur Murray San Antonio, our country dance teachers share a passion with their students for the music, history, and traditions of the American West.

Suffering from a case of disco fever? Boogy on over to our hustle and nightclub two-step classes where the spirit of the 1970s lives on! If you’re looking for something more traditional, try out our lively polka classes, or cuddle up with your special someone in a Slow Days session.

No matter what style of social dancing you’re looking to learn, we have it here at our San Antonio dance studio! To learn more about the different dances we offer, and discuss which one (or several!) is right for you, get in touch with the Arthur Murray San Antonio team today. Be sure to ask about how you can get your first lesson free!